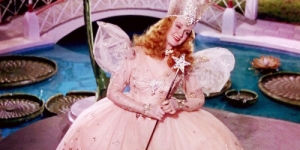 She’s smiling because she’s evil! Eeeevil I tell you!

If you recall, Glinda started the conflict by giving Dorothy the shoes that were Ms West’s only remembrance of her sister, who was so tragically killed by a falling house.

Imagine how you’d feel if the cops gave your dead sibling’s shoes to the person responsible for his or her death.

Glinda is a trouble maker. She interrupts a distraught Wicked Witch, who is trying to find out what the hell has happened to her sister, with the antagonistic, “Aren’t you forgetting the Ruby Slippers?”

The Wicked Witch pleads for the tokens of her sister’s memory.

The very defiant Glinda says, “There they are. And there they’ll stay!” 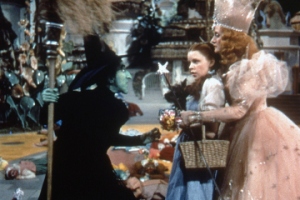 Meanwhile, you can see Dorothy’s terror. Clearly she does not want to get involved. …and she sure as hell doesn’t want those shoes! – well, maybe.

Glinda further stirs the pot when she commands the Wicked Witch, “Be gone! Before somebody drops a house on you.”

Somewhat unsettled by this, the Wicked Witch takes her leave, – but not before threatening Dorothy and her dog Toto with bodily harm.

Formulating a plan, Glinda says to Dorothy, “I’m afraid you’ve made a rather bad enemy of the Wicked Witch Of The West.”

This is where I think Glinda, upon sending Dorothy off on a wild goose chase, sets her plan in motion. 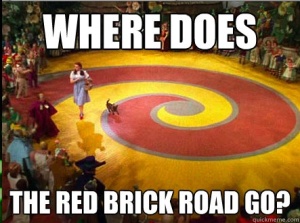 It’s a shortcut to Emerald City.

In my warped mind, Glinda sets off in her bubble to the Emerald City in order to convince the Wizard to use Dorothy as a means to finally rid themselves of Wicked Witches. Why not? She already killed one witch. what’s another? That’s why she sent Dorothy to the Emerald City by way of the more scenic Yellow Brick Rd, instead of the more direct Red Brick Rd. Everyone in Oz knows Yellow Brick Road runs right past Ms West’s Castle! It’s one of the premier tourist attractions of Oz!

My conspiracy theory comes from one single moment at the end of the film when you realize that Dorothy has been played.

Glinda, with a big smile on her face, says to Dorothy, “You’ve always had the power to go back to Kansas.”

Are you kidding me?!

I just wanted Dorothy to look Glinda straight in the eye and say, “I. Killed. The. Wrong. Witch!”  I wanted Dorothy to beat the living daylight’s out of Glinda. …or maybe look around for another bucket of water. If it worked for one witch, maybe it would work on another.

Glinda, the “good” witch. Ha! I wanna smack that vacant smile right off that bitch’s face!

So, I went in for X-Rays last week as part of a post-procedure checkup to see if the Lithotripsy did what it was supposed to do. — For those of you just tuning in, I’ve been dealing with an uncooperative right kidney for almost a decade. After three procedures, each with varying degrees of success, I underwent lithotripsy in order to remove the last of the debris that was floating around in there.

According to the report, there’s still some “scattered calcific densities” floating around but the large 8mm behemoth is gone. Yay!

Here’s the thing, though. Have you ever read your own medical records? If you haven’t, you better make sure you’ve got a sense of humor. A cup of espresso wouldn’t hurt either as there’s a lot of repetition and technical language. But the sense of humor is important because, well… Here’s a quote from my X-Ray report…

The bowel gas pattern is normal… The bones are grossly unremarkable.

Say what!? For the sake of decency, I’ll leave my bowel gas pattern to the professionals, but my poor bones. — They say beauty is only skin deep but, apparently, my bones are “grossly unremarkable”.

Ah well. It made me laugh and I hope it did you too. 🙂

The guys at Good Mythical Morning have some fun with this high holy day of superstition.g 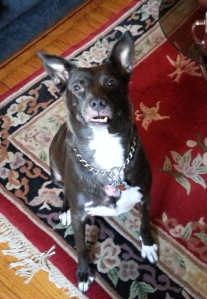 if anything happens to her human,

Mary Ann comes to live with me.

Here, she’s got her eyes locked on a treat I’m bribing her with.

She’s got no interest in picture taking. 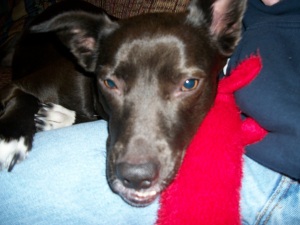 …or so she’d have you believe.

But there’s plenty of evidence to suggest

that she secretly knows just how cute she really is.

in a previous life,

So… You were mad at love because love was acting like an idiot.

Love tried to make you laugh, but you were not buying it,

because you were mad at love, and mad you were gonna stay!

But you laughed anyway.

Now you’re the idiot, driving around for hours trying to find a place to dump the body.