“In 1928 there was an estimated 1.2 million “out” homosexual men living in Germany.  As Adolf Hitler rose in power, gay organizations were banned and scholarly books regarding homosexuality were burned. Hitler’s racial state ideology branded homosexuals not only as “parasites” and degenerates, but as enemies of the state. In 1935, the Nazi government significantly expanded the criminalization of homosexuality.” via Stop Homophobia

If this doesn’t sound familiar, perhaps you should take a look at the rising anti-gay hysteria going on in Russia since Vladimir Putin enacted the Russian LGBT Propaganda Law which claims to “Protect Children from Information Harmful to Their Health and Development” but in has since led to an increase and justification of violence against LGBT people. To be clear, these laws have nothing to do with family or children. These laws are meant to scapegoat gays in very much the same way Germans scapegoated Jews and other “undesirables”.

The following is a collection of quotes and links compiled from around the web that shine a light on the forgotten victims of nazi terror.

“Those who cannot remember the past are condemned to repeat it.” – George Santayana

“In Nazi Germany, homosexuality was persecuted to a degree unprecedented in history. In 1935, the National Socialists issued an order making all male homosexuality a crime; the provisions governing homosexual behavior in Section 175 of the Criminal Code were significantly expanded and made stricter. A kiss was enough reason to prosecute. There were more than 50,000 convictions. Under Section 175, the punishment was imprisonment; in some cases, convicted offenders were castrated. Thousands of men were sent to concentration camps for being gay; many of them died there. They died of hunger, disease and abuse or were the victims of targeted killings.” — Travels of Adam

By now, most people are familiar with the Pink Triangle which, along with the Lambda and the Rainbow Flag, is a symbol for LGBT pride. But it has a dark history, one that isn’t taught in school. I remember a teacher talking about nazis exterminating millions of Jews and “others“, as if the others were an insignificant footnote of world history. When pressed, he explained that the ‘others’ were made up of gypsies, socialists, deviants and political prisoners. 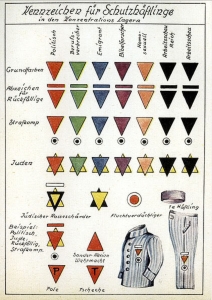 “Under the direction of SS head, police drew up “Pink Lists”, and embarked on a vicious crackdown on homosexual men and women. Many were sent to mental hospitals, others were castrated by court order, and 100,000 of these men were sent to concentration camps.The pink triangle (now a symbol of Gay Pride) was placed on the prisoners to mark that they were homosexuals. An estimated 55,000 were executed.

Heinz Dormer, spent nearly ten years in prisons and concentration camps. He spoke of the “haunting agonizing cries” from “the singing forest”, a row of tall poles on which condemned men were hung: “Everyone who was sentenced to death would be lifted up onto the hook. The howling and screaming were inhuman, beyond human comprehension”. source 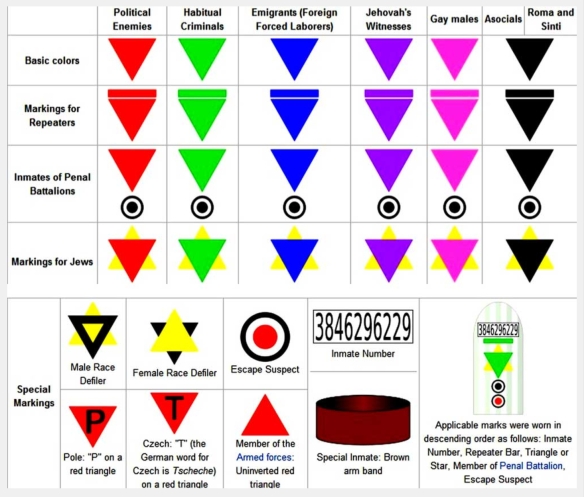 Here is the badge chart translated to English

The vast majority of those forced to wear pink triangles didn’t survive.

“The Nazis believed that male homosexuals were weak, effeminate men who could not fight for the German nation. They saw homosexuals as unlikely to produce children and increase the German birthrate. The Nazis held that inferior races produced more children than “Aryans,” so anything that diminished Germany’s reproductive potential was considered a racial danger” — US Holocaust Memorial Museum

“Nazis interested in finding a “cure” for homosexuality expanded this program to include medical experimentation on homosexual inmates of concentration camps. These experiments caused illness, mutilation, and even death, and yielded no scientific knowledge.– source

“There are no known statistics for the number of homosexuals who died in the camps.”

I don’t know what it’s like to have family members that have survived the horrors of Auschwitz. It’s something for which I have no frame of reference so I would never assume to put myself in the same category as those with a direct familial link to nazi persecution. But I can identify with those who were singled out for something that is innate, especially when I look around and see history repeating itself.  I can honor forgotten victims.

The fight against fascism and bigotry must also incorporate the defence and support of the Gay and Lesbian Communities. The message needs to be made loud and clear, and repeated often; ANY form of discrimination, bigotry or oppression must be fought and defeated in the 21st Century!!! — PNW

When we say “Never Again” we’ve got to mean it for everybody. It’s the only way to ensure that we are all safe from persecution because, if they come for one group they will come for yours too.

For more on Gays and the Holocaust…