I had intended a Friday post about my recovery from lithotripsy, which is progressing smoothly and without complications. Unfortunately, Thursday morning I received incredibly sad news. A very close friend lost her battle with uterine cancer. I am heart broken by the loss and angry at the circumstances around which she died. The rest of my day was spent in a fog. After not being able to sleep, I found it helpful to just start writing. The following unorganized mess is more therapy for me than anything else.

In the years that my other half and I have been living on this little South Philly block, we’ve established close friendships with our neighbors. With a few exceptions, we look out for one another.

I met Fran through a friend and neighbor who lived two doors down. She was moving onto our block. With her sharp wit and wicked sense of humor, Fran fit right in. She was the kindest and most generous soul I have ever had the privilege to know. That’s not hyperbole. There was nothing Fran would not do to lend a hand to anyone in need. If it was within her power, it was done. 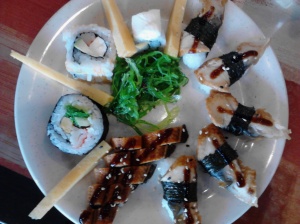 A perfect example of our First Friday Sushi events. 🙂

My friendship with Fran developed slowly. We bonded over our Italian heritage, and gastronomic pleasure, which included first Friday lunches with our friend Scott. I’ve often bored you with pictures of sushi and sashimi. Fran was a vegetarian, but that didn’t prevent her from enjoying her sushi. 🙂  She and I had an ongoing dialogue about ways to recreate meat-free versions of childhood dishes. It wasn’t uncommon to see either of us carrying plates of food from one house to another. Fran was the inspiration for some of my favorite epicurean experiments.

About eighteen months ago, Fran began to experience pain and bleeding. She was in her sixties so menstruation was out of the question. After a few months of doctors and tests and more doctors and even more tests, it was determined that Fran had stage 3 uterine cancer. It was emotionally crushing.

Our monthly lunch dates continued even as Fran started chemotherapy, but tapered off as some of her experimental treatments took their toll. She was listening to advice from conflicting sources, and people with no medical training who claimed a certain food, vitamin, or magic root was a cancer cure. She went gluten free, tried a macrobiotic diet, and went to extremes to find and eat only organic fruits and vegetables. Meanwhile, she was asking Scott to pick up bagels from Dunkin’ Donuts.

Now, let me stop here for a minute and assure you that I am in no way blaming Fran for her illness or worse, her death. That would be absurd and cruel. I am Pro-Choice. Being pro-choice means allowing a person autonomy. I’m angry because there is so much misinformation being disseminated out there. She was scared. She was reaching for anything that might give her hope. I feel, however incorrectly, that Fran was taken advantage of. I  mentioned the Dunkin’ Donuts because Fran needed to get food into her body. When you’re perpetually nauseous, any food is better than nothing. We encouraged her to eat whatever she could keep down. You’d be surprised at some of the odd things she craved. Fran had an affinity for pickled cherry peppers stuffed with prosciutto and provolone. We asked if she might not be pregnant. {:-)

Last summer, Fran found out about a Vitamin C therapy. It’s an alternative cancer treatment that involves massive doses of vitamin c administered intravenously. Since it could be administered while a patient was also undergoing chemo, Fran signed up. The treatments were hell. Chemo was bad enough, but on the days she received the vitamin C, she was in bad shape. It often took two days for her to recover from the therapy. By January, the oncologist was refusing to give her chemo because she was too weak. The best they could do was rehydrate her with saline and send her home. The vitamin C had done more harm than good. It was clear that Fran’s time on Earth was limited.

During the worst of her illness, it was Scott who did most of the heavy lifting. When Fran needed something, it was Scott she called. Scott taxied her to doctors, treatments, and trips to the grocery store.  Fran’s illness took it’s toll on him. Her death hit him hard. He’d been through this once before when longtime friend and neighbor Mary Ann died just a few years ago. This time was worse because he and Fran were real close.

Fran was rushed to the ER Tuesday night. She was in pain and having trouble breathing. She was admitted to the hospital, where they treated her pain. There was nothing more they could do. Her siblings took shifts sitting with her in the hospital room. Fran passed away 1:00 am Thursday morning. Her brother and one of her sisters was in the room with her.

There’s going to be a viewing next week, followed by a Wiccan ceremony. Fran was a Wiccan high priestess. I’m so proud of her sister, who is Roman Catholic, for adhering to Fran’s wishes.

I’m not sure how to wrap this meandering mess up, but I suspect you will all understand. This past year has been a rough one. There’s been enough sickness in our little burg. So you’ll forgive me if I tend toward the ridiculous sometimes. It’s a hell of a lot better than dwelling on the sadness. Besides, I’d much rather remember the happy, joyful soul that was Franny T.