So, I got a new Windows 8 laptop and was trolling through YouTube for tips and tricks when I found this video.

The guy from Tek Syndicate  is friggin hysterical!! — and I mean that in a friendly way.– He holds your attention as he demonstrates how to clean all the bloatware from your computer.. Even if you’re not a techie you’ll find this humorous as well as educational.

New Laptop: What to Do When You Get a New Notebook/Laptop/PC

FYI- This post is for education and entertainment purposes only. If you are unfamiliar with the inner workings of your computer, you should leave it to a knowledgeable professional. Neither I nor Tek Syndicate can be held accountable for your computer.  In other words, you’re on your own.

NOTE: I’ve been with Virgin Mobile for about a decade. I resisted cell phones for a long time. The truth is, I don’t like talking on the phone. I never did. So, for me, a cell phone was a waste of money. It was my boss who suggested I get one. My responsibilities had just increased and well, with increased responsibilities come even more responsibilities. I chose Virgin because they were the cheapest. At the time it was $20 a month Vs $80 for the other major carriers. – You do the math. 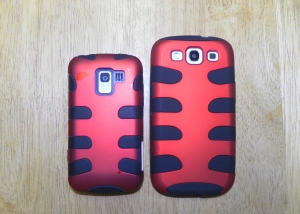 The old boy on the left is dwarfed by the new improved, I can’t live without it, model.

So I just upgraded my phone…

There was nothing wrong with my old one, really. It was only two years old. It’s got a few dings and scratches, but it works just fine.

Perhaps that was the problem. It only worked “just fine”. It was a fine mid-range smartphone for someone like me, who had not yet immersed himself fully into the Android OS.

I blame my e-reader.

A year before buying my smartphone, I bought a nifty little e-reader tablet for a hundred bucks. It was my very first Android device. This puppy had a resistive touch screen, which meant I had to press it to get it to respond. It was the early days of Android tablets. I didn’t know any better.

Within a year I had had enough of the resistive screen. I was tweeting heavily by then, and a resistive screen is just… no. So I saved my pennies and as luck would have it, Tiger Direct and Amazon were competing to see who could offer me the best deal on a new tablet.

Now I had this sweet tablet, with an operating system that I was slowly getting accustomed to, that was supplementing my PC nicely.

If only my cell phone was just as useful.

I had this little “feature phone” which was fine for texting, email, and even twitter, but I couldn’t follow many of the news feeds I was reading on a regular basis. And forget blogging.

Luck smiled upon me again. Radio Shack offered up a “fine mid-range smartphone for someone like me” at reasonable price.

I really did like this small, unassuming phone. I could read my books, magazines, and most of the news feeds I like. It was a little workhorse.

Then, about a year ago, I started running out of space. I moved as many of the apps onto the SD card as I could, but I was still finding I had to chose between Angry Birds and Twitter. “Oh, the humanity!”

The writing was on the wall.

So I had this two year old phone that still worked, but I’d outgrown it. I made the decision last April to shop for something a little better. I even considered leaving Virgin. – That lasted all of two days; the length of time it took me to realize that I really didn’t want to spend more than $50 a month.

I started saving my pennies again. Virgin had just lowered the price of one of their smartphones, but a little voice in my head asked if I really wanted to “settle” for something I’d probably outgrow in a year. So I waited. …and kept saving those pennies.

A month later, Virgin added the Galaxy S3 to their line-up. It was twice what I wanted to spend. Should I wait? If I wait, maybe the price will come down. But by then, something better might come along.

The deciding factor was Amazon. They dropped the price by $50 AND… if you apply for an Amazon credit card, you get another fifty bucks off. Woohoo! The Gods had smiled down upon me once again. Where do I sign?

So now I have this great new phone. It’s fast. It’s powerful. It’s pretty. I love it!

Do you think I should upgrade my tablet?