“There will never be a cure! Big Pharma is making too much money stringing me along from one treatment to another.” – Sam W.

In order to help keep AIDS awareness in the minds of people around me, I thought I’d share some of my personal experiences, and how HIV/AIDS has affected people in my life. The following is pulled together from casual conversations with my friend Sam, whom I’ve known for almost two decades. I’ve entered direct quotes as I remember them. Everything you read here is fact.

Sam, quoted above, has been living with AIDS for a little over twenty years. He tested positive in 1991. His survival, he says, is a double edged sword. He feels fortunate to be alive but, like many LGBT folks our age, most of his close friends are gone. “There’s no one left!” he says. “In the early 90s my friends were dropping like flies, one after the other. I thought I was next. My doctor told my parents to make my final arrangements. I was prepared to die.” Sam told me that when he didn’t die, he went into a depression. Psychologists call it Survivor’s Guilt.

Though ten years younger than Sam, I can easily empathize. At the height of the pandemic, AIDS took most of my friends. But the friends that I lost were relatively new friendships. Sam had known most of his friends for ten, fifteen years. You’re not supposed to lose so many friends at such a young age.

Sam says his biggest lament is the cost of survival. He was fortunate enough to have had a decent enough employer who provided him with healthcare, and who was understanding enough to alter his work schedule as needed. He worked for as long as he could, but by the mid-nineties his health had so declined that he had no choice but to go on Social Security Disability and wait for death. Then Protease Inhibitors came along.

The new drugs that saved his life cost a small fortune. Sam takes three Anti-HIV pills which cost about $900 per bottle, and a handful of medications to handle side effects that cost between $20 and $150 per bottle. And that doesn’t include regular blood tests, doctor visits, and medical procedures.

“Remember the assisted suicide controversy in the 90s?” he asks. “All those conservatives wanted to hang Dr. Kevorkian! Now they want to cut my benefits! (Social Security, Food Stamps, Medicaid, Medicare) Where’s their compassion for the sick and dying, now?? If you don’t want to help me live, then allow me to die!”

Sam assures he doesn’t really want to die. He’s understandably frustrated by a system that has failed him. It would be difficult for him to go back to work. He couldn’t even afford a part time job. If he went back to work, he’d lose his healthcare. If he lost his healthcare, he’d get sick again and most likely die.

In a perfect world, Sam could rejoin the workforce, keep his healthcare, and maybe pay an affordable percentage of his salary back into Medicare. The trouble is the cost of prescriptions. As long as he has to take those expensive medications, he can never leave Social Security.

I reminded him of the recent advancements in developing a vaccine. “There will never be a cure!” he says ” Big Pharma is making too much money stringing me along from one treatment to another! It’s a scam, and the American people are too blind to see it!”

Though careful what I say to him, I can’t help but think perhaps he’s right. There’s no money in cures. The money is in treatment. If you cured cancer tomorrow, all those Cancer Treatment Centers would go bankrupt within months. Susan G Komen would cease to exist. I hate to sound pessimistic, but I have little faith in a system that values money over people. 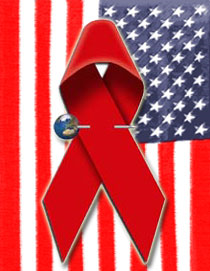 The best I can offer is try to educate people around me and hope that they pay attention.

AIDS (Acquired ImmunoDeficiency Syndrome) has been around for three decades. Some of the biggest myths about AIDS that still persist today include, “It’s a gay disease” “It can’t happen to me” and “There’s a cure”. AIDS is not a “Gay” disease. It CAN happen to you. There is NO cure.

Knowing all of this, would you rather protect yourself and your loved ones, or spend the rest of your life at a doctor’s office?

To learn more about HIV/AIDS, check out the NIH AIDS info page.  http://www.aidsinfo.nih.gov/