If you are a registered voter in the United States, you have no excuse NOT to vote.

The midterm elections are much more important than the presidential elections. The midterms determine local politics, the stuff that affects you on a day-to-day basis. If you’re unhappy with what is or isn’t being done, don’t blame Obama. Blame your local elected officials. The president isn’t king. There’s only so much he can do on his own.

Are you out of work? Are you underpaid? Are you barely able to make ends meet? Republicans are giving away the store to corporate interests, leaving us to foot the bill.

Remember this scene from Rosanne?

That scene could have been written yesterday, but it was two decades ago! Republicans are still shoveling the same crap. Tax breaks to lure companies who provide low wage jobs to families who then still have to rely on food stamps.

We can’t keep letting the GOP sell America to the lowest bidder! We can’t let congress give religious extremists the right to bastardize the constitution to suit their needs!

Please. Vote. Vote as if your life depended on it. If not for yourself, do it for the future of your children, your family, your country.

Thanks to the folks at Word Press, here is a voter information tool to help you find your poling place on Tuesday, November 4th.

UPDATE: The following was written a year and a half ago. Since then I’ve tried three more times to correct the disparity between my driver’s license and my voter’s registration. As it stands now, my driver’s license spells my last name all one word but my registration separates the ‘De’ from the rest. The poll workers know me but tell me if Pennsylvania’s voter ID law goes into effect, I will not be permitted to vote.

Yeah. Don’t tell me voter ID is about fairness.

I’m a registered voter in Pennsylvania, one of the numerous states whose Republican Governors have proposed laws to require voters to present “State Approved Identification” in order to cast a vote in upcoming elections. On the surface, these sound like common sense laws. In reality, they are bureaucratic nightmares. These laws are solutions to problems that do not exist. But that’s not what this post is about.

During last November’s general election, the courts had put a stay on Pennsylvania’s new Voter ID law. They found that there wasn’t enough time to provide proper ID to the thousands of Pennsylvanians who didn’t have it. The lines at the PA DMV were so long that people were being turned away. It was decided that voters would be asked for ID, but it would not be required to vote. Poll workers were also instructed to ensure that each voter’s ID correctly matched what was on record, and to advise the voter to rectify it before the next election. There were leaflets and everything.

I didn’t think this would be an issue for me. I had my ID. So, with ego properly inflated, I confidently marched up to polling place and proudly presented my driver’s license.

Apparently, my middle name is spelled out on my driver’s license, but my voter’s registration shows only an initial. My registration also shows a “Sr” after my name, as in Frank Senior. This is ostensibly a problem because I don’t have a son named Frank Jr..

NOTE: Other than my address, the information on my voter’s registration has not changed in almost three decades.

After voting, I thanked the nice woman and promised I would fill out a new registration form with the correct information. All was well with the world.

Being the procrastinator that I am, I filled out the new registration form at the end of March. There were a myriad of reasons why I waited. There always are. Three weeks later my new voter’s registration arrived by mail.

The new registration is printed exactly the same as my old one, with the exact same errors. What gives? How difficult is it to copy information from a piece of paper? How hard is it to check the information found on my driver’s license, and enter it into a database? Wasn’t that the reason I was asked to provide them with my license number?

I contacted the Election Commission and spoke to a very patient gentleman who was as puzzled as I was. He accessed my driver’s license information to verify my identity. He looked at a scanned image of my new application, which had the correct information. and couldn’t understand why the records hadn’t been updated. After a few questions, I was told that my new registration should arrive within a week.

It took almost four weeks for the new voter registration to arrive, just in time for Pennsylvania’s Primary Election. This time, my last name was altered.

I have an Italian last name with a “De” prefix, as in DeNiro, DeLuca, or DeAngelo. Pennsylvania driver’s licenses use all capital letters, and the De is not separated from the rest of the surname. On the new voter’s registration however, the prefix IS separated. You wouldn’t think this was an issue. Apparently, the poll workers thought it was enough of an issue that it needed to be addressed. I was told that I could be turned away because of that simple technicality. REALLY??

Now I have to contact the Election Commission AGAIN, and walk them through the correct spelling of my name.

Does anyone else see the problem, here?

I vote every election. I take it very seriously. It’s about more than just selecting a new Mayor, Judge, Senator, or President. There are ballot questions and referendums. The voting booth is one of the few places in which my opinion matters. In the words of ronsuperman, I don’t vote “because campaigns have been drilling it into our heads reasons why we should or should not vote for a particular candidate. But I will be voting because voting = power, and I cannot sit back while decisions are made around/about me, and I have no input.”

I also don’t want some inattentive paper pusher’s mistake to prevent me from casting my vote.

How can they ask for proper ID if they’re not going to ensure that the information they record is correct? Why must I jump through hoops if a bureaucrat can’t get it right?

If we can’t ensure that everyone can easily obtain the proper ID required to cast a vote, then we need to stand down on aggressive laws designed to make it virtually impossible to engage in our Federal Voting Right.

I threw that last thought in there as an expression of my angst.

Seriously though… If anyone, regardless of criminal background, can order an assault weapon online without proper identification, why should my middle initial, or the prefix of my ethnic surname cause so much trouble at the polling place?  #smh

PS: The point of this rant is simple. I’m surviving on minimal resources. If I’m having trouble meeting the requirements for “State Approved Identification”, what about the people who don’t even have what I have?

Well, it’s that time of year again. Kids are back in school. Persephone is returning to Hades. The leaves on the trees are transforming into a kaleidoscope of colors. And a chill is beginning to creep over those of us that live in the northern hemisphere. I’m not gonna lie. This six foot, two inch, manly man is a winter wimp! — Don’t laugh. I can be manly. I have power tools! 😎

Anyone who lives in a house knows the ongoing ritual required to maintain it. We make endless checklists, and then make multiple trips to the home improvement store because we forgot the list. Our South Philly home doesn’t have gutters or shingles. We don’t have a lawn or a garden that needs to be winterized. What we do have is that wretched mainstay of cheap post-war architecture and design, Aluminum Windows. I want to know whose brilliant idea it was to put aluminum windows on a house where winter temperatures can dip below freezing? And if that wasn’t bad enough, the designer, in his or her infinite wisdom, decided that marble would make lovely window sills. — Because, apparently, aluminum windows don’t make the house cold enough.

Our first winter here was an eye opener.

When you’re just getting started in a new home, and your relationship is all shiny and new, your mind isn’t on the little details like window sills. So imagine my surprise one morning, while going about my daily bathroom routine, when what felt like a waterfall of cold air descended upon my lap. — Brrrrrr! Talk about wake up calls. 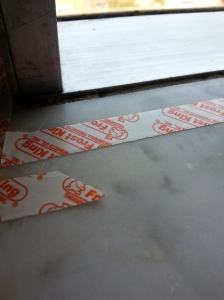 Whose brilliant idea was it to install marble sills on aluminum windows?

We tried our best to be conservative with the thermostat but our heating bills were predictably high that winter. So we made a list. We took a walk through the home improvement store and made a list of all the things we could do to avoid freezing our butts every winter.

Now, every autumn, I get ready to install what we have lovingly come to call White Trash (or ‘Ghetto’) Storm Windows.

When September turns into October, I apply the double sided tape around the perimeter of each window. I learned the hard way that if you wait until winter settles in the tape won’t adhere properly to the cold aluminum, which has a tendency to sweat due to the temperature difference. The only downside is the ribbon, printed with the Frost King logo, that surrounds each window. But that’s a small inconvenience when you remember the cold flow of air descending upon your lap from the bathroom window.

When temperatures fall in a few months, we’ll apply the plastic to the windows. Until then we’ll try to ignore the little orange snowmen marching around our window frames.

Someday we’ll get new windows. It’s on our to-do list. Until then, we’ll be the couple that lives in the South Philly house with shrink wrapped windows. 😉