Some of the language may not be appropriate for all audiences, but it’s adorably funny.

I figured a little light humor would be good thing after such an unbelievably bad week.

The news of Robin’s death was such a shock. I’m still having a difficult time believing that it’s true.

There are people who touch our lives in such profound, undefinable ways. Robin Williams was one of them. He made us laugh, but he also made us think. He made us question things while we were laughing at them.

“No matter what people tell you, words and ideas can change the world.” – Robin Williams

Like many Americans, I first saw Robin Williams in an episode of Happy Days called My Favorite Orkan. My six year old sister was madly in love with Henry Winkler’s Fonzie so we never missed an episode. So when Mork and Mindy debuted the following fall, it was naturally added to our viewing line up. 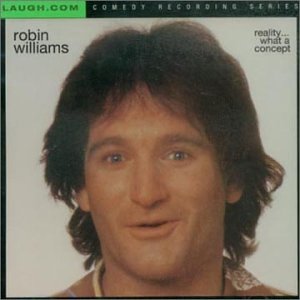 While my family was gathered around the tube watching the weekly adventures of Robin and Pam Dawber, my friends and I were memorizing the jokes form the “Reality…What a Concept” LP, a live recording of Robin’s 1978 Roxy performance.

Through the years, Robin Williams has brought us nothing but happiness. News of his death was a complete shock. I still can’t believe it.

“You’re only given a little spark of madness. You mustn’t lose it.” – Robin Williams