There’s a ridiculous notion that because you support protesters and stand up for justice that somehow you can’t also support police and law enforcement.

I’m referring, of course, to the ridiculous controversy over the St. Louis Rams showing solidarity with the Ferguson community. 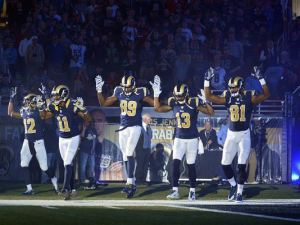 Personally, I think an apology from the Rams is unnecessary. The fact that their act is so controversial shows there is still a race problem in the United States. I find it absurd. The team’s “Hands Up, Don’t Shoot” protest didn’t take anything away from anyone. It caused no harm. If anything, it shows awareness of, and support for, fans.

Just because I believe police officers must be held accountable for misdeeds doesn’t mean that I don’t believe that most cops are basically good. Law enforcement is a difficult and thankless job. We demand a lot from cops. We expect them to arrive the minute we call, but then jump on the entire force when one goes rogue. It doesn’t help that the bad cops get all the press. I’ve encountered good and bad cops on both sides of the law. Yes. I was arrested once, during an ACT-UP protest against Bush Sr. One of my arresting officers was unnecessarily violent. — but I digress. I can support law enforcement’s efforts to keep crime at bay and still stand in solidarity with Ferguson protesters. It’s not an either/or scenario. Which brings me to another issue.

There is a difference between protesters and looters. I fully support the Ferguson protesters. Though I completely understand the anger that led to vandalizing and looting, I don’t condone it. Neither do the residents and protesters of Ferguson. So let’s not lump protesters and vandals together.