A Homosexual Invention By Alan Turing. Who cares if he cracked the German Enigma Code and won World War II. 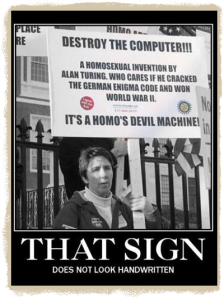 I saw this photo circulating around the interwebs. It bothered me that there was no information identifying it’s source. So I did a Google image search for the image to find out what, if any, protest this is associated with.

When you look at the full image, as posted on WeWasteTime you’ll notice that she’s carrying a rainbow flag. So I had to wonder from where this image originates and why, if she’s holding a homophobic sign, she is carrying a gay pride flag. (Look closely. They’re ALL carrying rainbow flags.) 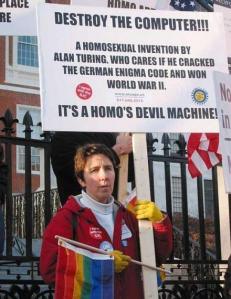 The very first link took me to an online video game “Destroy The Computer” (by KibaGames) in which you throw punches at, you guessed it, a desktop computer. But it didn’t explain the anti-gay signage. It’s a stretch to assume punching the computer symbolizes a hate crime in some way. — Though I’ve certainly hated my computer at times, I don’t believe my PC represents ALL computers. That would be OS-ist.

The earliest posting I could find of the image was May 2006 on Barking-Moonbat.com. A watermark on that image led me to StrangePolice.com and that’s where the trail ends.

The fact that there is more than one person in the photo, and that they are closely grouped together, leads me to believe this is a staged photo.

Why anyone would stage such a photo is anyone’s guess. Part of me suspects it’s a promotional stunt to raise LGBT awareness. Not many people know who Alan Turing is, or that the process by which he cracked the German Enigma code led to the modern day computer. Many more are unaware that Turing was a homosexual.

This simple image has been spreading LGBT awareness around the interwebs in it’s own little way for more than seven years. None of the feedback that I’ve seen has been particularly homophobic. That, in itself, is pretty amazing.