Yes, we have come a long way. A very long way. But after watching the documentary, you might be surprised at how much has remained the same.

Just because we elected a Black President doesn’t mean we are a “Post Racist” America.

The following excerpts are from “James Baldwin: Who Is The N*gger”  by John Aravosis which appeared on AmericaBlog.com (7/15/2013)

“What you say about somebody else, anybody else, reveals you. What I think of you as being.  It’s dictated by my own necessity, my own psychology, my own fears and desires. I’m not describing you when I talk about you, I’m describing me.”

Some remarkable dialogue from “Take This Hammer” which illustrates Baldwin’s remarkable faith in man.

Young African-American kid: There ain’t gonna be no negro president of this country.

Baldwin: There will never be a negro president of this country. Why do you say that?

Kid: We can’t get jobs, how we gonna be a president?

Baldwin: Exactly. But, I want you to think about this. There will be a negro president of this country. But it will not be the country that we are sitting in now.

The 2013 TIME 100 was released a week ago. I’m always suspicious of lists. Often, they are nothing more than self promotion and mutual masturba back scratching. But I think Time Magazine got it right on at least three of it’s picks.

John Legend writes of Frank Ocean as a respected colleague and close friend. “Frank is brilliant,” he writes. “The day I started writing with him, it was clear that he has a very interesting mind and a distinctive way of expressing himself. He was fearless and innately creative. You talk to some people in this business and you get the sense that they’re very focused on radio: what will be a hit or won’t be a hit. You never get that from Frank. The focus is on creating something that’s beautiful, that’s great art.

“Frank broke a lot of rules with his album Channel Orange. He wasn’t focused on “What’s gonna be my single?” And obviously, one of the cardinal rules was that he wasn’t supposed to come out. But he did…”
Read more of John Legend’s praise of Frank Ocean. 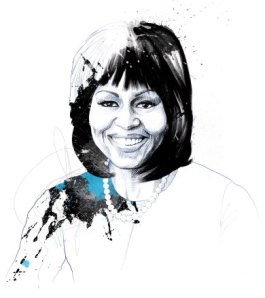 Illustration by David Despau for TIME

Maya Angelou wrote one of the most beautiful pieces on a First Lady I have ever read. Of Michelle Obama, she writes, “Modesty is a learned affectation. It’s just like decals. As soon as the world shakes the modest person against the wall, that modesty will drop off them. But humility comes from inside out. It says someone was here before me; I have already been paid for. All I have to do is prepare myself to pay for someone else who is yet to come. And that’s exactly what Mrs. Obama’s doing with the fight against obesity. She considers all children her responsibility: black or white, pretty or plain, all the children.The philosophers tell us that power corrupts and absolute power corrupts absolutely. Mrs. Obama is as if it doesn’t touch her. She hasn’t tried to become anybody else’s idea of the First Lady. She has remained herself, with her grace, her gentleness and her sense of humor. That she would dare to wear clothes off the rack. Or go out and garden. Or have a grandmother in the White House. She knows how to be a public creature without being separate from her family.” Beautiful words for a beautiful First Lady.
But my favorite by far is what Chelsea Clinton wrote of 15 year old accidental activist, Malala Yousafzai

“People whose courage has been met by violence populate history. Few, though, are as young as Malala was when, at 15, a Taliban gunman boarded her school bus in northwestern Pakistan and shot her and two other girls, attempting to both kill Malala and, as the Taliban later said, teach a “lesson” to anyone who had the courage to stand up for education, freedom and self-determination, particularly for girls and women. Or as young as 11, when Malala began blogging for the BBC’s Urdu site, writing about her ambition to become a doctor, her fears of the Taliban and her determination to not allow the Taliban — or her fear — to prevent her from getting the education she needed to realize her dreams.Malala is now where she wants to be: back in school. The Taliban almost made Malala a martyr; they succeeded in making her a symbol. The memoir she is writing to raise awareness about the 61 million children around the world who are not in school indicates she accepts that unasked-for responsibility as a synonym for courage and a champion for girls everywhere. However Malala concludes her book, her story so far is only just beginning.”