In honor of Pride Month and the issuance of the Harvey Milk US Postage Stamp, here’s a short clip from the award winning 1984 documentary “The Times of Harvey Milk”

This short yet inspiring speech is something everyone should hear. Milk asserts that LGBT Rights, Civil rights, Women’s Rights are all connected. We need each other to succeed. Together we are strong.

Milk insists that we not forget the LGBT youth who are struggling with their identity. Give them hope for a better tomorrow.

“Without hope, life is not worth living.” – Harvey Milk 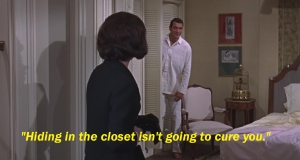 Intentional or not, that wink at Rock Hudson’s sexuality is a typical example of Hollywood using homosexuality as the butt of a joke. But the gay jokes are subtle compared to the blatant sexism which was the main attraction in this movie.

In A Very Special Favor, Michel Boullard (Charles Boyer) fears that his daughter, a 30 year old Psychiatrist, is destined to become a lonely spinster. — It doesn’t matter that’s she’s a successful doctor. She’s 30 and single. Shocking! In an effort to ensure his daughter’s future happiness, Mr. Boullard cooks up a crazy scheme with handsome lady’s man, Paul Chadwick (Rock Hudson). Dr. Boullard does get the upper hand, but not without a few cringe worthy moments.

It’s a cute move that’s worth watching. It will make you laugh and, like Mad Men, give you a glimpse at a time in American history when, no matter how much a woman achieves, she couldn’t be happy unless married and pregnant

Produced by Y2D Productions in association with Chamäleon Productions

“The audience gets gravity-defying spectacle and the wizard behind the curtain at the same time.”

In this gleeful combination of circus and theater arts an ordinary man’s world spirals into a gravity-defying performance of acrobatic talent, whimsy, and optical illusions. From confined spaces spring limitless worlds as video animations playfully interact with the live perfomer. All ages.

Sorry, Olivia Dunham and Walter Bishop probably wont be there.

Shane Koyczan “To This Day” http://www.tothisdayproject.com Help this message have a far reaching and long lasting effect in confronting bullying.

“My experiences with violence in schools still echo throughout my life but standing to face the problem has helped me in immeasurable ways.

Schools and families are in desperate need of proper tools to confront this problem. This piece is a starting point.” – Shane

Dozens of collaborators from around the world helped to bring this piece to life. Learn more about them and the project at http://www.tothisdayproject.com

Buy “To This Day” on BandCamp http://bit.ly/VKGjgU