So, over the week of July 4th we took a drive through New Jersey in what seems to be a new tradition. — Though, putting it in writing will probably put an end to it.

This lady, lounging atop a hill, greeted us as we entered the park.

We chose the hottest day of the year to tour our neighbor state. It was in the upper 90s and humid. 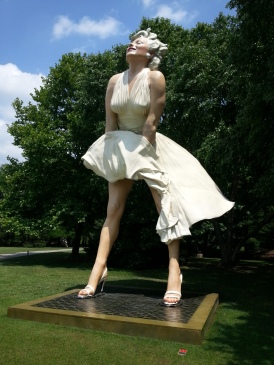 If you live in the Philadelphia area you know that the Jersey Shore is a popular summer destination. But there’s a whole lot going on between here and there that deserves some attention.

Our first stop was Hamilton Township, NJ to see Seward Johnson’s 26ft Marilyn Monroe at Grounds for Sculpture. The statue, a representation of the iconic Monroe in the 1955 comedy The Seven Year Itch, is part of a Seward Johnson retrospective that also includes the new 25ft recreation of his “Return Visit” statue (1991), in which President Abraham Lincoln explains the Gettysburg Address to a tourist in a sweater, and “Unconditional Surrender” which captures the famous Times Square V-Day moment when a sailor kissed a nurse. This iconic sculpture, enlarged to 25 feet, has been exhibited on both US coasts (Times Square, San Diego) and abroad (Rome). 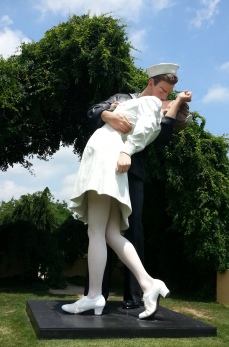 We chose the hottest day of the year to tour our neighbor state. It was in the upper 90s and humid. My camera lens kept fogging up. Thank God for air conditioning. …and shade.

The Grounds for Sculpture is a big meandering outdoor space with paths through open gardens and wooded areas that provide plenty of shade.

The heat didn’t deter crowds from gathering around the towering Monroe who stands smiling up at the bright summer sky like a giant sunflower. Kids pretended to take refuge from the heat under the shade of Marilyn’s iconic dress, stealing curious glances upward in an attempt to learn secrets they were probably too young to know. After waiting patiently, we were able to get a few pictures of Marilyn by herself.

A few of the startlingly realistic sculptures that hide along the shady trails.

One of the really cool things about The Grounds is that there are paths and trails that lead everywhere. Getting lost would be easy but not unpleasant, as there are sculptures hidden everywhere.

Detail, interior of ‘The Chamber of Internal Dialogue’ (2011) featuring a 3D mural of ‘The Scream’ by Edvard Munch. It’s a small air conditioned rood in the center of the park.

In our effort to escape a group of children on a treasure hunt, we stumbled upon The Three Fates (2011).

Good thing the sun was still shining, as these ladies are truly terrifying! 😉 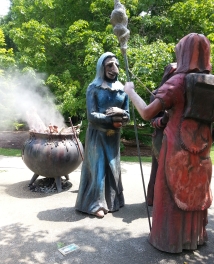 Back inside the main building, we found some powerful reminders of 9/11 in “Makeshift Memorial” (2014) and “Double Check” (pictured) which was once located in Liberty Plaza Park across an intersection from the World Trade Center. When the towers came down, the debris and ash covered statue became a symbol of the World Trade Center victims, murdered for simply going to work.

After a few hours of ooohs, ahhhs, and “Hey! Come look at this!” it was time to get back on the road again and head east. The two of us hot and sweaty and desperate to dip our toes in the Atlantic Ocean.

at the Island Beach State Part

Actually, we were headed towards Island Beach State Park to get a peek at the Osprey, which nest in the area. Unfortunately, we didn’t get a chance to see any of the hawks up-close. Maybe it was the time of year. — Ah well, there’s always Osprey Cam.

We did get to dip our toes in the Atlantic Ocean, though. The water was cold but felt pretty good after our adventure in the hot sun. It was a very good day. 🙂

Love gets a head start to dip his toes in the Atlantic Ocean. 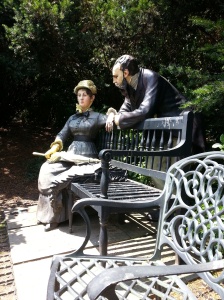 These life-like sculptures are everywhere!

What’s cooking? Detail of the cauldron in The Three Fates sculpture. Yummy!

One of the trails throughout Grounds for Sculpture 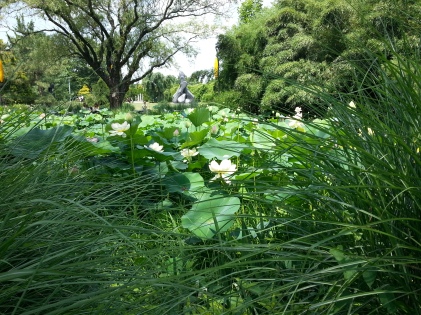 You can’t even see the pond under all the water lilies and grasses.